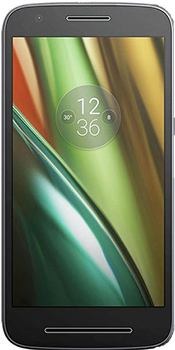 Motorola Moto E3 Power - Defensive Player!
Motorola finished its work and Moto E3 has been released with outclass Power for which we are waiting for a long time ago. Now this phone is out of assembly line and soon it is going to hit the shelves in your local markets. Motorola Moto E3 Power is carrying 5.0 inches IPS display that brings you the capacitive result along with 720 x 1280 pixels resolution and it give you the pixel density of 294 ppi which is quite impressive number. Motorola Moto E3's engine is combined together with Mediatek MT6735P chipset while on top of that quad core 1.0 GHz cortex-A53 processor is sporting at quite impressive speed. Motorola E3 Power bring you Mali-T720MP2 to enhance the graphic display while playing heavy games and watching videos. A mammoth 2 GB RAM is also installed inside Motorola's Moto E3 Power that do its job faithfully while multi-tasking is also improved. All these specifications includes one more important function which the 16 GB built-in memory of Moto E3 Power by Motorola. You can also expand the memory up to 32 GB through a micro SD card. 8 MP back camera is equipped with auto- focus and LED flash light that help you to click images even in low light conditions. Motorola Moto's E3 Power is carrying 5 MP front camera which is good choice for taking selfies. It carries dual SIM cards slot that support 3G and 4G LTE also. Moto E3 Power is carrying LI-ion 3500 mAh battery that provide you long lasting time because of its cortex A53 that reduce the energy consumption and enhance the device performance in an extraordinary way. E3 Power is the best choice for you in the given time period.